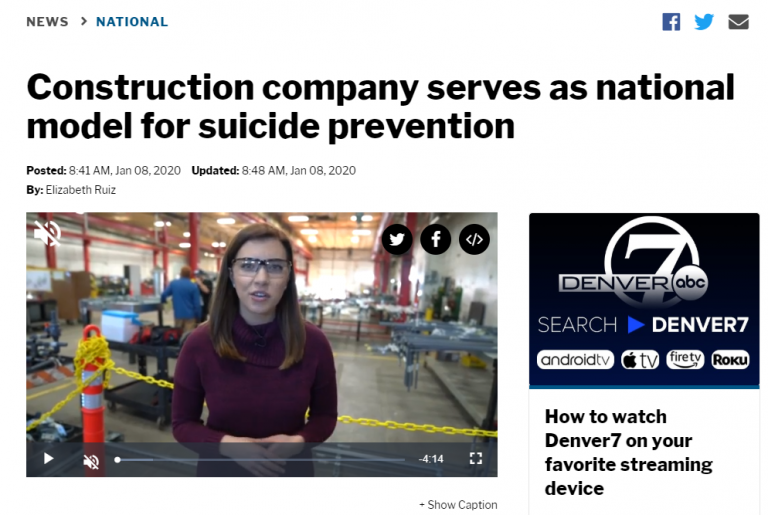 January 9, 2020 – We are thrilled to share that RK was featured in a Denver 7 national news story that aired yesterday, January 8, 2020. The story, “Construction company serves as national model for suicide prevention,” highlights the importance of removing the stigma around mental health in the workplace.

RK Project Superintendent, Dean Italiano, shared his story of struggling with mental health and thoughts of suicide. He said, “There are some days you just feel like you just can’t go on. I mean it’s just… the pain is so great. And it’s so hard to explain to people. You just feel like you’d rather just not deal with it anymore.”

Dean said he is thankful for the support he has received at RK, and he knows that the company culture is rare. “It makes me so proud of this company, and it makes me want to stay here,” Italiano said.

Jon Kinning, RK’s Chief Operating Officer and Executive Vice President, explained how RK has changed the way they are thinking about mental health in the workplace, stating, “If our people are struggling, you know they shouldn’t suffer in silence. I mean there’s something that we can do.”

Jon says that he is open to sharing RK’s mental health model with competitors and believes this would be beneficial to the greater good. “If we’re bold enough to bring an uncomfortable topic, maybe that emboldens other business leaders around this region or around the country to do the same thing. Like this just makes sense. Why should there be a stigma around this?”.

RK continues to make mental health and suicide awareness a topic priority inspired by brave people like Dean who ended the story with words of inspiration. “Don’t give up. Fight. Just fight every day. Just fight on. It’s worth it,” Italiano stated.

If you or someone you know is struggling, please call the National Suicide Prevention Lifeline at 1-800-273-8255.