June 2, 2015 – At the AGC May Annual Safety Award Banquet, RK received To an award for Excellence in Safety, presented to Tom Alvarez and Rick Dalton by AGC. This award was given to RK for having zero lost time accidents and having a below national average for total recordable incidents.

RK also recently won the Platinum STEP Award presented by ABC for exemplary safety. Tom Alvarez, RK Safety Manager, is pictured here accepting RK’s award. Tom was also nominated by ABC’s Board of Directors to serve as their Safety Chairman for the remainder of the year, and Tom gladly accepted this leadership role. RK’s safety awards and involvement in safety issues continue to position the company as one of the safest companies in the region’s construction and manufacturing sectors. 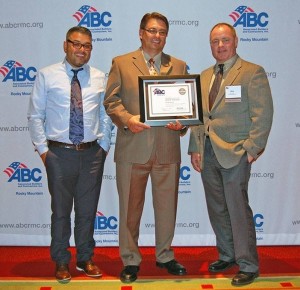